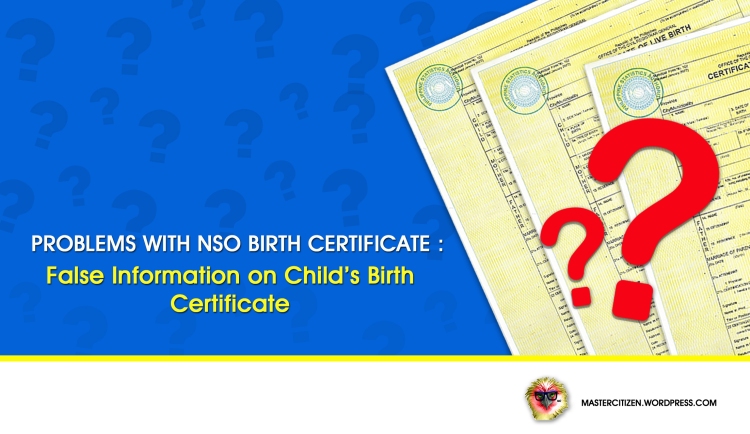 Another common birth certificate problem encountered by Filipinos are erroneous declarations on the details of their birth, particularly details involving the parents.  Some parents declare that they are married at the time of their child’s birth, when in reality, they are not.  What they probably do not realize is that these false information will eventually surface and cause a huge deal of confusion in their public transactions.

Other false information that may be written on a child’s certificate of live birth are:

Such is the case of Rodel who grew up under the care of his single mom, Rebecca.  His father, Danny, left for the U.S. when Rodel was barely a year old and has not returned since.  They communicate only through mail and occasional phone calls.  Danny sends him money and regular basic supplies from the U.S. and because of his help, Rodel is able to attend good schools in Manila.

When Rodel was about to graduate from high school, Danny came home for a visit and after 16 years, father and son met for the very first time.  He offered to petition Rodel so he can study and work in the U.S.; Rebecca readily agreed to let her son go so he can pursue his studies abroad.

While they were in the process of completing the documents required to file the petition, Rodel learned that his parents did not have a valid marriage certificate.  Although his birth certificate shows that his parents got married on Valentine’s Day in 1999, no other documents could support this claim.  When he asked his mother about it, she admitted the following:

Rebecca and Danny separated before Rodel turned one because Danny’s parents did not approve of Rebecca.  They were also minors when they had Rodel and for that reason, they could not get married to make their union legal.  They kept their relationship a secret, including Rebecca’s pregnancy and Rodel’s birth.

Being minors then and under so much pressure, they thought it wise to declare on their child’s birth certificate that they are married.  They also faked the years of their births to make it appear that they are of age already.  Danny’s parents took him the U.S. to take him as far away from Rebecca as possible, not knowing that he already has a child with her.  While Danny was in the U.S., he and Rebecca decided to set their relationship aside and just focus on raising Rodel and providing for his needs.  Danny lived up to his commitment with Rebecca that he will provide for all of their son’s needs.  They remained friends ever since and both remained single until this time.

In reality, Rodel is an illegitimate child, born to parents who were not legally allowed to marry when he was born.

With everything out in the open, Danny, Rebecca, and Rodel decided to consult a lawyer for advice on what they need to do in order to get their son’s civil registry documents straightened out.

These types of cases are not solved by merely filing a petition for clerical error.  It is not covered by R.A. 10172 (Act authorizing the city or municipal Civil Registrar to correct clerical or typographical errors in the day and month in the date of birth or sex on birth certificates).

If you have a similar problem with your birth certificate, you may consult the office of the LCR where your birth was registered.  You also have the option to take the matter to a lawyer for legal advice.